I hope everyone is enjoying the middle of summer! I'm starting to feel a little frantic about how soon all my reading/relaxing time will come to an end—but we still have a few more good weeks ahead of us! Also, this past Thursday, I wrote about some of my frustrations with MG books as a genre—check it out here!

Moving on to today's review for MMGM and #IMWAYR, I have one last review of a graphic novel about middle school experiences (after Truly Tyler and Just Pretend) before we shake things up next week. Today, I am recommending the graphic novel Kyle's Little Sister by BonHyung Jeong. 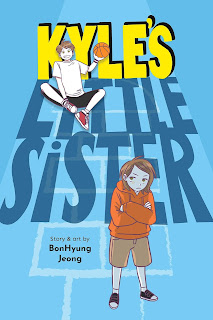 I decided to try out this graphic novel after seeing a review of it by Alex Baugh at Randomly Reading, and I'm glad to have tried it out! This story centers around Grace, a 6th grader who is frustrated at constantly being in the shadow of her popular older brother Kyle, an 8th grader. Whether at home, where she fights with him over the TV or feels ignored by her mom, or in the same school, where both of their friend groups collide in unpleasant ways, Grace finds herself both a bit jealous of Kyle and very, very aggravated with him. Grace finds solace in her long-running friendship with Amy and Jay, but when things go awry between the three of them, Grace just has even more on her plate...and navigating new and old middle-school friendships on her own isn't easy. But as Grace works to figure out a path forward, she starts to realize that maybe there's more to her, and her brother, than what she thought.

In a similar vein to the graphic novel I reviewed last week and enjoyed, Just Pretend, Kyle's Little Sister has an emphasis on typical family issues that is somewhat rare for MG books! I feel like the only family drama MG authors ever think to include is related to parents (and is often crazy-depressing—dead parents, fighting parents, abusive parents, etc.). But many kids actually have trouble with siblings too—and normal, relatable sibling trouble, not sibling-with-cancer kind of trouble—and that is worth writing about in MG stories! Grace struggles with being in the shadow of her older brother, Kyle. He is outgoing and knows tons of other students, whereas she tends to keep to her small group of friends—and since they have to go to the same school, she has to watch this difference play out in real time daily. Multiple kids in school have crushes on Kyle, including some of Grace's own friends—which is aggravating as well, since she thinks he is quite obnoxious and undeserving of said attention (and he definitely is obnoxious to her sometimes). Even at home, it sometimes feels to Grace like Kyle is the favorite of the family (although this went a bit unexplored in the book). BonHyung Jeong works hard to make the drama between Grace and Kyle realistic, and it comes across as quite relatable to readers. I also appreciated that Kyle isn't depicted as some caricatured cartoon villain—he gets enough attention in the story that he comes across almost as another point-of-view character, and readers see that he has his own reasonable aggravation with his friendships being inadvertently interrupted by Grace and her own friend drama (Grace's friend Amy is the sister of one of Kyle's friends, Andrew [at least, I think his name was Andrew...], which doesn't help matters). And one random little detail I loved: Kyle has another friend, Liam, who drives him and Andrew a little crazy with his wish to have siblings of his own and his certainty that, deep down, both Kyle and Andrew love their younger sisters. It's a great example of this book never taking itself too seriously, and being better off for it!

But it's never just family drama with MG books, and indeed, a major crux of this story is the friendship issues that befall Grace, Amy, and Jay. The three friends are a bit of an odd bunch—Grace enjoys playing video games (better than Kyle and his friends, I might add), Amy loves to geek out over K-pop groups, and Jay likes to try out new board games. (All of these interests are quite delightful at times, I might add!) Despite their differences, though, these three have been together for a long time, so when hurtful words are said and the three kids find themselves spiraling into new friend groups (or not), it is an unpleasant time for all. There's some meaningful ideas here about making friends with the popular kids and even being complicit in acts of bullying, and I also liked the message that even if you make the mistake of letting a conflict fester for so long that it seems insurmountable, it's still worth trying to repair things. The friend drama, as well as the rest of the story, comes to life with BonHyung Jeong's delightful art! The style of this book is reminiscent of manga, with big eyes and triangle mouths dropped open in shock, fun little doodles that start off each of the 10 chapters, and little asides that characters say to themselves in smaller font just outside the speech bubbles (one issue: some readers might need glasses to catch these parts!). Combined with some of the fun aspects of this book and its willingness to never take itself too seriously, it reminded me a bit of Awkward by Svetlana Chmakova (though Awkward is absolutely the better book, don't get me wrong), and it could be a great book for younger readers who love the fun art and squee-ing demeanor of manga but maybe aren't ready for some of the bizarre toxic messages I've encountered in some of the manga I've read. (I mean, I love Fruits Basket as much as the next person, but think about it for more than 10 seconds and...wow. Just wow.) One more thing: despite the manga-esque art style, the art is still relatively easy to interpret at a glance (in large part due to the white or fade-to-white backgrounds of the panels), which is why this book garners a relatively high Rating for the Graphic Novel-Averse!

I did have a few minor issues with Kyle's Little Sister, many of which won't be problems for the middle-schoolers who will enjoy this book, but which might be a touch aggravating for those of us who know the general middle-school drama plotlines in MG books. It takes Grace a long time before she is ready to take the initiative and fix her life's problems, and particularly when it meant being somewhat complicit during frequent acts of bullying, I was frustrated that she didn't take action sooner. There is also an issue with her friendship drama where readers know some things before Grace does, and it takes Grace a while to figure out and then confirm these things, even though I knew how that whole aspect would turn out anyway. I also wished the resolution involving Grace's relationship with Kyle was a little bit more solid—there is quite a bit of resolution, but it just wasn't quite as much as I had hoped for. (And what was the deal with Grace reacting to Kyle's rudeness with violent pillow attacks? It's entertaining, sure, but it goes without quite enough reprimanding to make me feel comfortable.) I think in general, I hope this book is the start of a series, because I'd like to spend more time with the fun characters and delightful storytelling style without spending quite so much time on Grace's moping and life struggles. But I will say, although the plotting wasn't perfect, BonHyung Jeong did acknowledge and resolve pretty much all of my frustrations at some point in the story—you never see characters getting away with toxic behavior or negative relationships forever, which I do appreciate.

Kyle's Little Sister isn't perfect, and the delightful aspects of this story left me wanting more than what this book ended up offering. But ultimately, this is a fun and wholesome read that kids will relate to in some surprisingly valuable ways, and if this is the start of a series, as I hope it is, then I look forward to seeing this fun cast of siblings and friends again in more meaningful, entertaining adventures!

My rating is: Pretty good!

My rating for the graphic novel-averse is: 3!

MMGM and #IMWAYR: Goodbye Stranger by Rebecca Stead (a re-re-review) 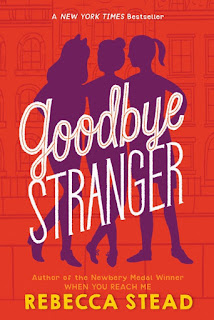 I hope everyone is doing well this week! I took an hour on Friday morning to listen all the way through Billie Eilish's new album of music, Happier Than Ever , and it was SO GOOD!!! If you'd like song recommendations, I recommend "Getting Older," "Billie Bossa Nova," "my future," "GOLDWING," "Not My Responsibility"/"OverHeated" (which are kind of a pair), "Your Power," and "NDA"/"Therefore I Am" (which I also think work better as a pair). Also, I keep forgetting to plug my Thursday Thoughts posts, so I'll do that now—a while back, I discussed two fun non-kidlit books I had recently read , and this past Thursday, I posted another original poem called "An evening walk" ! Moving on, I've got an interesting and RIDICULOUSLY LENGTHY blog post for you today about my favorite book of all time: Goodbye Stranger  by Rebecca Stead. I could probably have shortened this post, but in
Read more 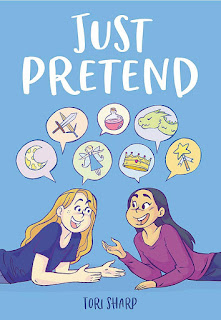 I have a few quick notes before we move into today's review. First of all, I have finally set up a Goodreads account for my blog!  It is currently a bit of a mess, and I will be trying to get it finished up over the next few weeks. And if you're already reading my blog, I honestly wouldn't bother looking at my Goodreads—it's only going to have mini-reviews of the books I'm already reviewing on my blog anyway, along with links back to my blog. But I hope it will be a useful way for new readers to discover my blog so that my posts don't just disappear into the ether! You can visit my Goodreads profile here. Also, some quick self-promotion: I have started a photography blog, A Scrapbook of Stories , that I am using primarily to participate in the #2021picoftheweek challenge hosted by MMGM's own  Of Maria Antonia  (which is also now open to book bloggers)! Make sure to stop by if you're interested. I also revisited my reviews from July to December 2020 in a
Read more

Completely Full Bookshelf
Welcome! I review MG and YA books (and occasionally picture books) every Monday, and I also share my thoughts/rant about reading in general every Thursday! I believe in ending systemic racism and discrimination, and I work to make this site a safe space for everyone. Happy reading!