Lots to discuss today! First of all, I have redesigned my blog! I won't get too far into the details (since I already did so in this post), but suffice it to say that the new template works better on smaller screens and is far more aesthetically pleasing. (It also has a new header image that I took myself, which features the book I am reviewing today alongside Faith: Taking Flight and The List of Things That Will Not Change!)

Also, it has officially been (a) an entire year since I joined #IMWAYR and (b) an entire year of me blogging every single week! I'm honestly as shocked as you are that I've managed it this long—as the MMGM bloggers know, I have had a history of dropping of the face of the Earth for months at a time. But I've finally managed to stick with blogging, and I plan to keep participating in both MMGM and #IMWAYR for as many consecutive weeks as I can manage!

One more thing: make sure to keep going past the end of today's review for information about the 2021 Books by Asian-American Voices Giveaway, which I am holding as a response to the horrible hate crimes committed in Georgia that resulted in the deaths of 8, including 6 Asian-American women (and the other horrible hate crime against a woman named Xiao Zhen Xie in San Francisco).

Before we get to that, though, I do have a book review today of the excellent novel Fighting Words by Kimberly Brubaker Bradley.

TRIGGER WARNING for sexual abuse and attempted suicide. (I'm sure that doesn't make you want to keep reading, but trust me—it'll be worth it. Unless these things are actually triggers for you, in which case, of course skip this post.) 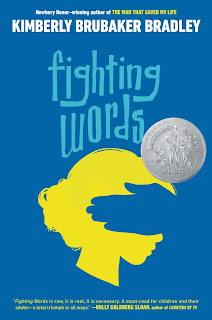 Fighting Words, besides being recommended by many book bloggers recently (such as Patricia Tilton, who wrote an excellent review of it over at Children's Books Heal), is a Newbery Honor book as of this past January! This award, combined with the countless recommendations of this book, managed me to get it read in a timely fashion. (Basically, if I read it within a year of everyone else, it's timely for me.) Fighting Words is the latest book from well-known MG author Kimberly Brubaker Bradley, who has been writing for 24 years and is probably best known for another Newbery Honor book, The War That Saved My Life. Whatever this book had been, it would have been a big deal, but after having read it, I can say that this book is revolutionary. Allow me to explain—right after this publisher's description, which I'm sharing instead of my own summary because it's way better than what I could come up with.

Ten-year-old Della has always had her older sister, Suki: When their mom went to prison, Della had Suki. When their mom's boyfriend took them in, Della had Suki. When that same boyfriend did something so awful they had to run fast, Della had Suki. Suki is Della's own wolf—her protector. But who has been protecting Suki? Della might get told off for swearing at school, but she has always known how to keep quiet where it counts. Then Suki tries to kill herself, and Della's world turns so far upside down, it feels like it's shaking her by the ankles. Maybe she's been quiet about the wrong things. Maybe it's time to be loud.

In this powerful novel that explodes the stigma around child sexual abuse and leavens an intense tale with compassion and humor, Kimberly Brubaker Bradley tells a story about two sisters, linked by love and trauma, who must find their own voices before they can find their way back to each other.

Giveaway Details:
I wish I didn't have to jump from one sad topic right to another, but that is just the world we live in, apparently. Hate crimes against Asian-Americans were already on the rise when a mass shooting in Georgia resulted in the deaths of 8 people, including 6 Asian-American women. In addition, an attack in San Francisco resulted in another Asian-American woman, Xiao Zhen Xie, being injured. As if all of that wasn't horrible and sobering enough, some people decided that now was the perfect time to say how the killer in Georgia's actions were motivated because "yesterday was a really bad day for him." And some more people (specifically, the U.S. Representative and apparent lunatic Chip Roy from Texas) decided that this was the perfect time to say that Texas is in favor of justice because Texans will just lynch the bad guys. (If you want to become wildly enraged, please read this relevant article.)
So, first of all, my heart goes out to the victims of these attacks and their families—so many valuable lives have been lost, so many real dreams and hopes crushed permanently. (This article and this article go through each of the victims in turn and are worth a read, and this article takes a closer look at one victim, Xiaojie Tan, and her family.) My heart also goes out to the entire Asian-American community, as there is obviously an enormous volume of fear resulting from these horrible attacks. I cannot imagine what it must be like to step out of the front door and fear for your life going to work or the store.
I don't want either of these horrible attacks to result in us shrugging and moving on. We need to do things to fix this. And there are some things to do! First of all, make some donations. Donate to Stop AAPI Hate, the organization that reported the increase in hate crimes against Asian-Americans in the first place (on that page, click the menu icon in the top-right and choose Donate). Or donate to the AAPI Community Fund on GoFundMe, which is actually run by GoFundMe and will distribute funds to a variety of relevant and important organizations. Also, please take a look at the GoFundMe pages for many of the victims here, here, here, and here. It's also worth taking a look at this page with resources and workshops regarding bystander intervention training that have been specifically adapted in light of these crimes.
Zooming in to the world of kidlit specifically, there are quite a few fantastic books by Asian-American authors and illustrators that deserve to be spread around and learned from. As such, I am running the 2021 Books by Asian-American Voices Giveaway to encourage you all to read some of these truly excellent stories! I will be giving away one (1) copy each of the following five books:

I have read each and every one of these books and can confirm that they are all FANTASTIC! Here are the rules of the giveaway:
I look forward to seeing entries in the giveaway and to spreading these incredible stories to even more readers! 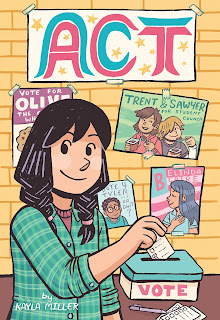 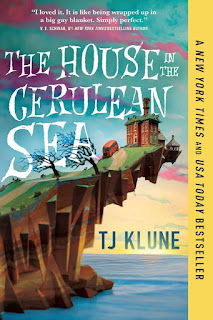