MMGM and #IMWAYR (11/16/2020): This One Summer, written by Mariko Tamaki and illustrated by Jillian Tamaki

OK, before we get to today's review, I have to vent. Today, in our house, we kept hearing a smoke alarm chirping as if the battery was low. Normally, smoke alarms chirp every few seconds, but this one was really irregular. Sometimes it would chirp, and then it would go silent. So my family and I ran around the house, trying to find this alarm every time we heard it. But it was absolutely bizarre: every time we ran toward the sound, it sounded like it was coming from a different place. We went upstairs, but then it was downstairs. We went downstairs, and then it was on the other side of the house. We went to the other side of the house, and then it was upstairs again. We. Could. Not. Find. It. We spent hours running around, pulling batteries out of five smoke alarms, putting them back in, testing them, wondering if our whole interconnected system was broken, Googling articles about how to find a chirping smoke alarm, and generally agonizing. And then—this is what really kills me—my sibling, who was on a Zoom call (with their mic muted) all day, mentions that they just heard that other people on the Zoom call could hear a smoke alarm chirping. My sibling's mic was muted. The smoke alarm was in someone else's house, playing over the laptop speakers. AAAAAARRRRRRRGGGGGGGHHHHHHHH!!!!!!!!!! I decided I would turn this nightmare into a productive experience by sharing it with you all for your entertainment—and perhaps this can help you all out when you hear your own phantom chirping smoke alarm.

For MMGM and #IMWAYR, I am recommending the graphic novel This One Summer, written by Mariko Tamaki and illustrated by Jillian Tamaki.

Fair warning: This One Summer talks about some stuff that many consider objectionable to MG readers, and I mention some of it below, so proceed with mild caution. This book is squarely considered an MG book, FYI. 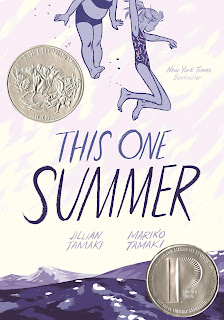 This One Summer holds a particularly interesting title (besides a Caldecott and Printz Honor): the most challenged (requested to be censored) book of 2016 (and the seventh-most of 2018), according to the American Library Association. I'll get into that more later, but I just wanted to mention it because that is the reason I decided to read this stunning graphic novel (along with this book being written by the author of the amazing Laura Dean Keeps Breaking Up with Me, Mariko Tamaki, who is getting her own LGBTQIA+-focused graphic novel imprint this spring!!!). (If you're curious, illustrator Jillian Tamaki is Mariko's cousin.) This One Summer's protagonist is Rose, who spends every summer with her parents in their cabin at Awago Beach, reading, swimming in the ocean, or hanging out with her friend Windy, who also visits each summer. This summer isn't like the other ones, though. Rose's parents keep fighting, she and Windy are going through puberty and grappling with growing up, and she and Windy get wrapped up in the problems of some older kids in Awago, which quickly approach tragedy. Together, Rose and Windy must learn to navigate the complicated world they live in, and it won't be easy.

I know, I know, I say every single book is "stunning," but this one really is stunning! ;) Seriously, though, This One Summer is gorgeous! I guess the first thing I should talk about is the whole most-challenged-book-of-2016 thing. Why has This One Summer been challenged so much? Well, there's an offhand mention of lesbians, and Tamaki has said that Windy is a lesbian (though that is never made explicitly clear in the book), but those are far from the only thing some people (mostly unreasonably) find objectionable. You see, This One Summer dares to depict how kids actually think and wonder as they are inevitably exposed to all the adult things adults wish they didn't know about. Some are less shocking, like adoption, miscarriage, teenage pregnancy, and breasts; others are more shocking, like attempted suicide (not by them, thank God) and even hearing about [redacted unless you click here]. Is that something I was shocked to see in any book, much less an MG book? Yes. But is that something kids already have heard about through some unfortunate venue? Well...yes. Here's the thing: kids know more than we all want them to. We want to keep them all preserved from the bizarreness and terror of the real world, but that just makes them want to know things even more. And if we pretend that kids don't know any of this stuff, they just feel weird and out of place for thinking about it. If they're going to know about it, someone might as well have the courage to normalize the act of thinking and wondering about it, and luckily for us, Mariko and Jillian Tamaki are those people. If you are a bit dissuaded from letting the MG readers in your life read this, I don't blame you, but I don't think there's anything here that kids are going to be scarred by. Also, for the record, it's not like anything objectionable happens; it's just talked about.

One of the really surprising things about This One Summer, to me at least, is that it does not offer up any morals about the things it discusses. Beyond the conclusions (most pretty reasonable) that Rose and Windy come to on their own, we don't really get much here. This One Summer is more interested in depicting the true experience of two kids grappling with the adult world than with offering up platitudes to kids. (The book's last sentence in particular is a truly hilarious rejection of MG books' tendency to offer up advice.) And that's a mixed blessing. You see, This One Summer does a gorgeous job depicting how two kids go about dealing with all of this stuff. They seem mildly horrified, they wonder out loud, they come to some wise conclusions (kids are more thoughtful than we give them credit for, after all), they come to some terrible conclusions (kids aren't usually as thoughtful as MG books give them credit for, after all), they offend each other and some other people, they make up, and they move on with life. But the problem is, This One Summer is so true-to-life about the unpleasant parts of being a kid that kids might not want to read it! They're awfully familiar with these experiences after all, and reliving them in book form isn't exactly all sunshine and rainbows. This One Summer doesn't offer up some adult's "wisdom" that kids will likely find useless, but by being such a good depiction of the issues of childhood, it might actually repel kids from wanting to read it!

The good news is that, although kids might find that this story hits too close to home, teens and adults (like me and many of you all) will find this book to be a stunning look into the lives of kids! First of all, This One Summer does an amazing job showing how Rose and Windy get tangled up in the messy lives of the older teens on Awago Beach. They never befriend them, but through always being in the right (or wrong) place at the right (or wrong time) (as well as a teensy bit of almost-stalking), these two curious kids end up entangled in a quickly-unfolding and painful situation. I appreciated how, for Rose at least, the whole experience tied into her experience of having early crushes, as well as how the whole situation affects Windy, who was given up for adoption and is thus acutely sensitive to some of the issues involved (you'll see what I mean). Also, this is not related at all, but one of the ways Rose and Windy grapple (poorly) with growing up is by secretly watching a bunch of horror movies and traumatizing themselves; I think pretty much every person on this earth can relate to watching something they weren't supposed to watch out of curiosity and then having to deal (secretly, of course, to not get in trouble) with the fallout.

More stuff! I love how This One Summer is set in a super-small beach town, and it totally nails the vibe of Awago Beach. The town is a touch mysterious, quite beautiful, and sometimes deeply boring—some days, Rose contents herself with swimming in the ocean or having fun with visiting family, and other days, all she can do is lie on her bed, reading comic books. Illustrator Jillian Tamaki's gorgeous, hyper-detailed art further sets the scene and allows readers to see how, for Rose at least, Awago is both hyper-familiar and completely unfamiliar all at once. Also, I should say that I really enjoyed Rose and Windy as characters; both are flawed, but they always remain likable and relatable, and they add a dose of fun (a small one, but still) to the story. I loved the scene when Windy, crazy with sugar, turns on the stereo and dances around the room while Rose quietly draws, bobbing to the beat. Finally, I want to say that the whole plot line involving Rose's parents fighting is really well done. You can really see how one person's inability to have fun on a trip can put a damper on the whole thing for everyone (again, highly relatable, I'm sure—I'm pretty sure I've been that person, unfortunately). Rose's mother and father are also flawed characters, but even as we see how their drama impacts Rose, we are never convinced to hate them entirely, especially at the end when we learn a bit more of her mother's backstory.

All in all, This One Summer is a shockingly unique book. It grapples with topics most YA books wouldn't touch with a 10-foot pole, it steadfastly refuses to take the moralizing route of most MG books, and it creates a world that, while sad, is realistic, vivid, and immersive. This One Summer is far from a happy or fun book, but it is a book that will strike a chord with practically any reader (especially the older ones not acutely feeling all of Rose and Windy's pain). I'm glad to have read this truly groundbreaking MG book, and I hope that you all do too so that you can see the possibilities that open up when authors step outside of the boxes set by the genre they are writing in.

P.S. A random inquiry to you all: Here in the U.S., Thanksgiving is coming up soon! As flawed and filled with irritating relatives as it is (though not this year—yes!), it is still my favorite holiday (mostly because of the food, to be honest). I wanted to ask you all if you have ever read any MG or YA books about Thanksgiving, since I feel like there must be some out there! Let me know in the comments!

Email ThisBlogThis!Share to TwitterShare to FacebookShare to Pinterest
Labels: Book Recommendations, Graphic Novels, It's Monday! What Are You Reading?, Marvelous Middle Grade Monday, Other

Class Act by Jerry Craft
Measuring Up by Lily LaMotte and Ann Xu
Hollowpox: The Hunt for Morrigan Crow by Jessica Townsend
Concrete Rose by Angie Thomas
Pumpkin by Julie Murphy
Delicates by Brenna Thummler
One of the Good Ones by Maika Moulite and Maritza Moulite
Everywhere Blue by Joanne R. Fritz (a fellow MMGMer!)