I'm back (a week late—sorry!) with a review of the graphic novel Positively Izzy by Terri Libenson (a follow-up to Invisible Emmie, which I reviewed here). 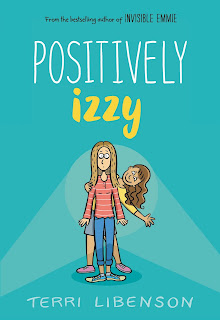 With her single mother at work every day, Izzy (one of two main characters of the book) finds herself constantly doing chores and being bossed around by her older sister, Danielle, who essentially runs the house when her mother is gone. Izzy finds solace in making up/acting out stories with her slightly younger sister, Ashley, and this passion prepares her for the upcoming school talent show, in which she is excited to perform a skit. However, when Izzy learns that she won't be able to perform in the show (I won't spoil why), she has to figure out, with Ashley's help, if there is any chance to fulfill her dream and act onstage.
The other main character of the book, Brianna (who readers will recognize as Emmie's best friend from Invisible Emmie), is a confident, straight-A student who excels at tests and loves writing papers. However, Brianna is less enthused about being known as a stuffy brainiac, especially in comparison to her fun-loving mother, who is the beloved drama teacher at Brianna's school. When Brianna ends up as a performer in the school talent show, she thinks it could be a good opportunity to step out of the confines of her reputation. But performing is harder than it looks, and, with the help of a boy named Dev (her partner in the show), Brianna must overcome her nerves and her newness to performing in order to excel onstage.
It's been just over a year since I read Greg Pattridge's review of Positively Izzy, and now that I've read the book, I wish I had sooner! There's so much to love about Positively Izzy, but I'll start with how well it depicts the many facets of Brianna and Izzy's lives. Both Brianna and Izzy wish they could be someone else; Izzy wishes that she could be smarter and do better in school, while Brianna wishes that she could be more multifaceted and not be thought of solely as good at school. So many books don't discuss the fact that many students are miserable in school simply because they can't keep up (as in Izzy's case), and I love that Izzy's struggles are a major part of the book. Brianna's jealousy of her supposedly-more-well-liked mother is also fascinating to see; it's the classic jealousy-of-the-popular-kids situation, but with a twist. Also, Brianna and Izzy are both extremely likable characters whose personalities and interests are visible in their alternating chapters (Brianna's are mostly in a comic-book style with panels, while Izzy's are prose with frequent illustrations).
I also want to touch on how well Positively Izzy depicts nontraditional households. Brianna's parents are divorced, and it's interesting to see how Brianna maintains a sense of family throughout the book, even as custody of her is shared. The book also illustrates the struggles divorced parents might have after custody is shared; Brianna's mother struggles to connect with Brianna as a result of their separation every other week. Izzy's experience with a single mother is also well-depicted; I don't think I realized how children may have to "pick up the slack," so to speak, when their parent is working all day in an attempt to support his/her children.
I love all of Positively Izzy, but my absolute favorite aspect is the twist on the very last page. If you have read Invisible Emmie, you know that it features a major twist at the end; Positively Izzy features a similarly executed twist, only far more genius. The twist is foreshadowed throughout the book, with ambiguous wording and clear parallels that I didn't even notice until I knew to think about them. The twist is the kind of twist that imbues the entire novel with a new meaning. If nothing I said in the last four paragraphs convinced you to read this book, please read it just for the twist at the end (which is part of a delightful epilogue, by the way). With excellent protagonists and a fascinating, enjoyable plot, I promise you won't be disappointed!

Update (7/8/2019): I have selected the winners for my giveaway! The winner of the signed copy of All Summer Long by Hope Larson is...

Congratulations! The winner of the unsigned copy of All Summer Long is:

Congratulations as well! My review for today is below.

For MMGM, I am recommending the graphic novel Swing It, Sunny by Jennifer L. Holm and Matthew Holm (the sequel to Sunny Side Up, which I reviewed previously). 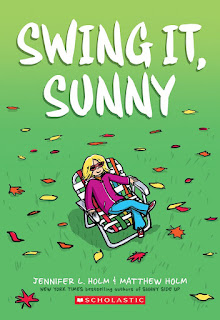 Sunny Lewin is not having a good time. She hates middle school, she has to get allergy shots every week, and her delinquent older brother Dale is now at boarding school, leaving her family down a member. Sunny tries to enjoy the things she usually loves: watching TV with her friend Deb, dressing up for Halloween, and talking on the phone with Gramps, her grandfather (a main character in Sunny Side Up). However, a shadow seems to be hanging over her entire life, and it certainly isn't helped when an angry, bitter Dale comes home for vacation. It's up to Sunny to come to terms with her new family situation and attempt to enjoy her year; with the help of Deb, Gramps, and new neighbor Neela, she just might be able to.
I love Swing It, Sunny for several reasons. Sunny has a kind heart that will make any reader root for her, and anyone can relate to her feelings as she works through the stresses in her life. The book is set over the course of an entire school year (although school only plays a background role in the story), and the plot moves briskly through the different months, each bringing holidays, family visits, and more. Like Sunny Side Up, Swing It, Sunny is set in the 1970s, and it does a great job of staying grounded in the decade (pet rocks play a part in the story, for example, and having 4 television channels is considered amazing). The TV shows that Sunny and her friend Deb enjoy watching also play into the story in many ways: the idealistic family of The Brady Bunch contrasts with Sunny's imperfect one, the isolated Dale is compared to characters stranded on an island in Gilligan's Island, and (on a more superficial level) the nurses of General Hospital inspire Sunny and Deb's Halloween costumes. As a person who was born decades after the 1970s, it was fascinating to see such a vivid glimpse into the decade. Some of the other storylines in the graphic novel (such as a visit from Gramps or Sunny and Neela's budding friendship) are fun to read as well. Finally, the art style of the novel is unique as well; it is uniquely unkempt and very expressive, with a feeling of motion present in every panel. Readers who enjoyed Sunny Side Up will adore Swing It, Sunny's blend of meaningful struggles, humor, history, and excellent art, and readers who have not read Sunny Side Up should rest assured that the second book holds up to the high standard set by the original!
Posted by Completely Full Bookshelf at 12:38 PM 14 comments: