MMGM (4/1/2019): Wundersmith: The Calling of Morrigan Crow by Jessica Townsend (not an April Fools' joke!)

First of all, I would like to remind you that the Spring Signed Book Giveaway ends on Tuesday morning! Be sure to enter today (Monday) to ensure that you get in before the giveaway ends. Enter using the form at the bottom of the linked post.

For MMGM, I am recommending Wundersmith: The Calling of Morrigan Crow by Jessica Townsend. Note that this review is NOT an April Fools' joke—I genuinely adore this book! (NOTE: If you have not read the first book in this series, read this review instead, as the below review contains some spoilers.) 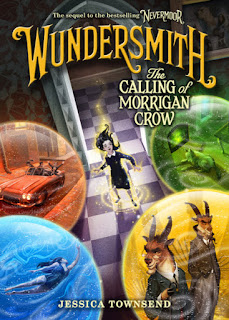 A little over a year ago, I wholeheartedly recommended the first book in this series, Nevermoor: The Trials of Morrigan Crow, which has gained widespread acclaim and is even being made into a theatrical movie! In this second book in the series, Morrigan has finally gotten into the Wundrous Society, a prestigious school where children with unique talents learn how to harness and hone their skills. All is not well and good for Morrigan, however, as her talent, which has an unfortunate stigma, unnerves other members of the Wundrous Society, both in her year and in others. She is prohibited from taking nearly every class (except for one about how her talent is evil), and it doesn't help that she and the other members of her year are being blackmailed. To make matters worse, members of the Wundrous Society start disappearing, and all eyes are on Morrigan, who is forced to try and figure out the cause of the disappearances while proving that she was not involved.
One of the best parts of Wundersmith is that author Jessica Townsend does a great job of putting her characters through the wringer while also giving them plenty of chances to have fun and enjoy themselves. Although Morrigan faces the enormous set of challenges mentioned above, she still has the company of her guardian, Jupiter North, and her best friend, Hawthorne. She is also just discovering the extent of the wonderful things throughout Nevermoor, ranging from fun holidays and yearly festivals to daily pleasures (such as traveling around the city by hanging off what is essentially a zipline). Townsend also gave Wundersmith great pacing: the plot moves quickly, with new challenges and developments constantly popping up during the novel. As I mentioned in my review of the first book, the characters are still awesome and weird (and there are some great new ones as well), and Wundersmith also ends with a one-two punch of twists, both of which will leave you thinking, "Of course! How did I not think of that?" While you should definitely read the excellent Nevermoor first if you are interested in the series, rest assured that Wundersmith is a fabulous sequel that only cements the excellence of this new series!
Posted by Completely Full Bookshelf at 11:10 AM 8 comments:

My time at NTTBF 2019, and the Spring Signed Book Giveaway!

As happened last year, the second semester of school for me has been busier than I can even wrap my head around, meaning that I have been unable to post for about two months. I cannot guarantee a reasonable posting schedule until the summer (Two more months! Two more months!), but I do have a post for you today. I want to tell all of you about my experience at the North Texas Teen Book Festival (NTTBF) 2019, and I have a giveaway of FIVE signed MG and YA books for you all!

First, the festival. When I went to the Texas Teen Book Festival a while ago (which is a different festival, held in Austin instead of Irving), there were not many activities other than book signings to go to, and I ended up not staying the whole day. However, at NTTBF on Saturday, there were tons of speeches and panels to visit, booths to stop by, lines to stand in, etc. First, I stood in line for about 30 minutes to receive wristbands for the author signings of Raina Telgemeier and Becky Albertalli. (Only 5 authors required wristbands; the vast majority did not). Here are some photos of the wristband lines outside of the Irving Convention Center: 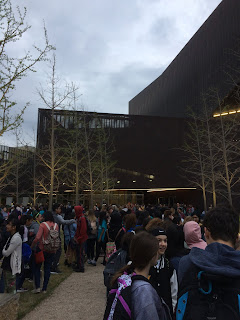 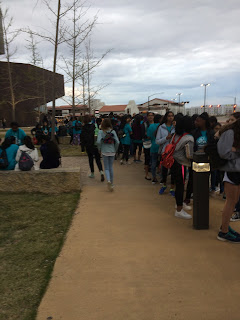 They were quite long, as you can see. Once volunteers started handing out wristbands, though, they moved quickly. I then went to the opening keynote for the day, which featured Raina Telgemeier and was therefore packed: 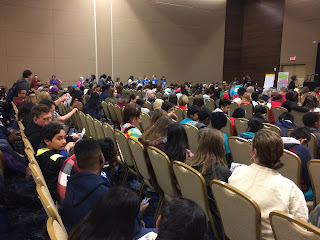 Here's Raina Telgemeier on stage (sorry for the blurry picture and weird cropping—my phone has an awful camera when zoomed in, and there were a ton of random heads at the bottom of the photo): 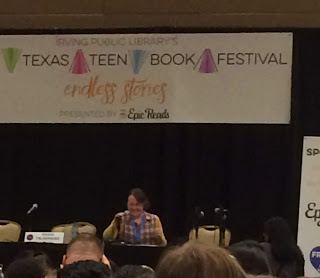 Raina Telgemeier's keynote was awesome! She started off by distilling the advice she usually gives people into three points: "Read books," "talk to people," and "tell your story." She had multiple slides about each of those, and she discussed the books that have inspired her, her earliest attempts at drawing and writing comics, and her own books (we even got to see some panels from/learn some details about her upcoming graphic novel, Guts!). At the end, she answered audience questions while drawing on her iPad (shown on the projector): 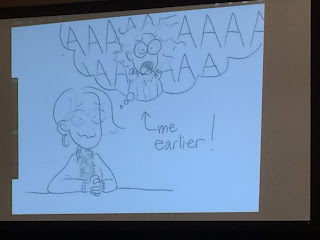 Once the keynote was finished, I attended several panels during the day. A couple of them really stood out. At the very beginning of the day, I attended a panel titled "Reading the Rainbow," about the importance of LGBTQIA+ themes in literature. The panel featured three YA authors, Sabina Khan, Julie Murphy, and John Corey Whaley, as well as a fourth author, Alex London, moderating. The panel took questions from the audience written on note cards (which allowed London to filter out repetitive questions), and Khan, Murphy, and Whaley thoughtfully talked about their experiences as LGBTQIA+ people (or parents of those people), gave advice to audience members about coming out, and discussed the importance of writing stories with LGBTQIA+ themes, regardless of backlash. The panel was heartbreaking, uplifting, and hilarious, and I am so glad that I had the chance to attend! Here's a blurry photo of the three authors on the panel (from left, Khan, Murphy, and Whaley): 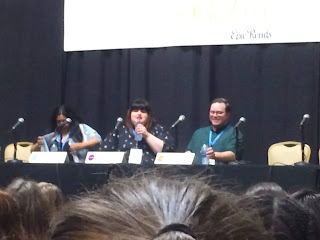 I also attended a panel called "Getting Graphic," which featured 4 MG graphic novelists, Max Brallier, Jerry Craft, Terri Libenson, and Raina Telgemeier, who discussed their writing processes and experiences creating graphic novels. Libenson discussed the differences between writing her ongoing comic strip The Pajama Diaries and her graphic novels (which she said are more constrained to a plot and length than her comic strip is). Similarly, Brallier discussed his experience writing different series of graphic novels at the same time (he said that one of his series is third-person and the other is first-person, and he has, at times, written sections of each series in the wrong point of view). An audience member also asked Telgemeier an interesting question: if she ever got back in touch with Sean (a character in her autobiographical graphic novel Smile who she had a crush on for much of the book). She explained that, although he unfortunately passed away due to ALS, she did contact him before he passed, and he had always dreamed of being a character in a comic book (a dream which was now fulfilled). Here's a blurry photo of the panel (from left, moderator Shylo Brandenburg, Brallier in face paint, Craft, Libenson, and Telgemeier): 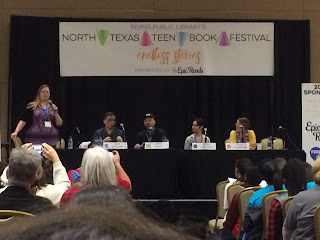 Finally, at the end of the day, I got to attend the book signings! I got three books signed to me, and, earlier in the day, I got 5 pre-signed books to give to you for the Spring Signed Book Giveaway! Because this post is dangerously long, I won't include publisher descriptions, but here are the books you have a chance to win:

First, you can win a signed boxed set of Invisible Emmie and Positively Izzy by Terri Libenson. Although I have not yet read Positively Izzy, I was a big fan of Invisible Emmie, which features a relatable main character (Emmie), a unique combination of comic panels and illustrated prose, and a great twist at the end (read my review here). Note that I am giving the entire boxed set to one person, since no one wants half of a boxed set.

Next, I have a signed copy of Ghosts by Raina Telgemeier! I love all of Telgemeier's graphic novels (don't be surprised if you see a review of Smile in the near future), but Ghosts is my favorite. It is one of the first books I ever reviewed (read my review here), but I still reread it due to its gorgeous artwork, its relatable, flawed, and admirable main characters (Catrina and Maya), and its masterful blending of topics such as cystic fibrosis and Día de los Muertos into a cohesive whole. 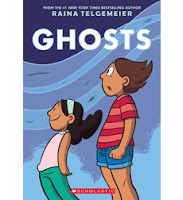 The only signed book in this giveaway that I've never read is Spy School by Stuart Gibbs. I remember that it was a favorite of other MMGM bloggers, though, so I grabbed a signed copy to give away.

I also have two signed YA books for this giveaway. One is Dumplin' by Julie Murphy. I love this novel (which happens to be massively popular and was adapted into a Netflix movie) for so many reasons. It features a diverse cast (people of all sizes, races, and orientations), thoughtful handling of topics such as obesity, a main character (Willowdean) that is simultaneously self-confident and insecure, and a fast-moving, exciting, and even shocking plot.

Finally, we have a signed copy of Simon vs. the Homo Sapiens Agenda by Becky Albertalli. This novel also happens to be massively popular and was adapted into the theatrical movie Love, Simon. I adore this novel so much!  It deals with complex topics (the main character, Simon, is gay, closeted, and being blackmailed) thoughtfully but never depressingly, always keeping a positive outlook full of humor and hope. Simon is a fabulous main character, and his friends are awesome side characters (some of whom are featured in Albertalli's other books, The Upside of Unrequited and Leah on the Offbeat).

I hope all of you are as excited for this giveaway as I am! The rules are as follows:

Posted by Completely Full Bookshelf at 9:13 AM 15 comments: